Jonathan has been obsessed with wildlife from an early age.Graduating in 1998 from Blackpool & The Fylde College of Art with a First-Class Degree in Design, specialising in Scientific & Natural History Illustration, Jonathan was awarded course student of the year.

After spending a year travelling and doing voluntary work, Jonathan immersed himself in the art of wildlife illustration, contributing to several books including the Guide to Freshwater Life (Collins) and Reptiles of South East Asia (New Holland). Alongside producing identification artworks, Jonathan was commissioned by several charities and magazines to produce artwork with a wildlife or ecological theme. Significant commissions include work produced for the BBC, National Geographic, Plantlife International, National Museums Liverpool and BASC. Several magazines have also featured his work including Birding World, Birds Illustrated and Shooting Times.

In 2005 his first solo book was published by Langford Press as part of their Wildlife Art Series (WAS), ‘Orchards Through the Eyes of an Artist’. His illustrations have been exhibited across Europe and the USA, including the biennial ‘Focus on Nature’ event in New York.

Having left illustration behind to concentrate more on ‘fine’ art, Jonathan now works exclusively in this field, but has painted ‘gallery’ work for many years. In 2003 Jonathan was awarded the title of Birdwatch Artist of the Year. In 2006 a painting was selected for the prestigious Leigh Yawkey Woodson Art Museum, Birds in Art exhibition in the USA. His work is frequently exhibited at The Society of Wildlife Artists exhibition at the Mall Galleries in London.

Alongside his own work based wherever possible on direct field observations, Jonathan is happy to undertake commissioned work. Over the last few years he has produced a broad portfolio of paintings for the Sultan of Oman, whilst in 2017 he was chosen to produce the annual UK Habitat Conservation Stamp for the Wildlife Habitat Trust, featuring Wigeon on the Dornoch Firth.

Painting style
Painting both birds and mammals, Jonathan spend as much time in the field as possible, carefully watching and sketching his subjects in an attempt to gain a thorough understanding of their attributes and behaviour before thinking about developing ideas for potential paintings back in the studio. 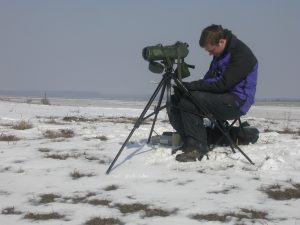 Jonathan’s work has featured in several UK publications, including Birds Illustrated, Birdwatch, National Geographic, Sporting Gun & Shooting Times. His artwork has also appeared on the cover of Birding World, (Vol. 13 No. 5 and Vol. 15 No. 4)

Jonathan sells work from his studio or via the Internet. Regular exhibition venues include: